These luxury culinary tours are an eclectic mixture of food walks, cooking demos, sightseeing, various fun activities, adventure and introduction to culture and history of India in one compact package. The group size is kept small to ensure maximum attention to detail. All the culinary activities will be led by Rajeev and his crew. Last date for booking a slot in this tour is 25th November.

On 15th December, guests arriving in New Delhi will provided transport from New Delhi airport, railway station or nearby areas to their hotel in New Delhi for rest and freshening up. Rajeev will meet up with them in the evening to take them for an orientation dinner in one of best gourmet restaurants in the city and explain the schedules, activities  and various other points about the culinary tour which will begin next day.

First day of the tour in Delhi will begin with a visit to  iconic Delhi landmarks, Lotus Temple, a beautiful Baha’i house
of worship built in 1986 and Qutub Minar, a 72 m tall tower built in 1193 and still standing tall. After visiting these monuments,  we will begin the food tour of Delhi from Old Delhi. This highly acclaimed food tour will serve as a great introduction to Indian cuisine and culture and will help set the pace for rest of your journey in India. During the food tour, we will include approximately 16-18 different Indian food dishes from different Indian cuisines from 8-10 different food joints in Old Delhi, Central and South Delhi. All of the food joints that we’ll visit have been in business for generations and are famous for their quality of food. The oldest place in the list is in business for 110 years and youngest for 40. We’ll taste some famous and some not so famous Indian delicacies like samosa, lassi, butter chicken, kulfi (Indian ice creams), , butter chicken, melt in m0uth kebabs and many others. The Old Delhi part of food tour will take us through the old, narrow streets of medieval Delhi marked by old havelis (mansions), markets which are doing business for centuries and tens of thousands of people milling about in their daily routine. Each lane in Old Delhi is a market for different commodity like invitation cards, spices, bicycles, cameras, utensils, vegetables, clothes , shoes, books and much more. The food tour will also include a visit to Spice Market of Delhi in which the we will learn about various kinds of spices used in Indian cooking and spend a few minutes inside a temple with a charitable which feeds more than 10000 people every day. 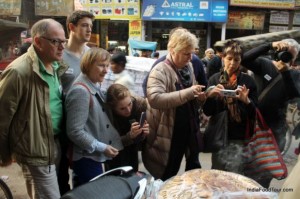 This day in Delhi will be dedicated to exploring it’s famous and a few lesser known attractions. To start the tour, we’ll first visit Humayun’s Tomb, a majestic monument built in remembrance of Humayun, the first Mughal king in India. The tomb’s design was used in Taj Mahal and the similarities between the two monuments is quite obvious. Next stop will be the awe inspiring Swaminarayan Akshardham Temple, a beautiful complex full of beautiful art, gardens and fountains. It’s also the world record holder for World’s Largest Comprehensive Hindu Temple. After lunch, we’ll visit the National Museum, which is among the largest museums in India and also the one with widest range of attractions.. A large number of articles ranging from pre-historic era to modern works of art are on display. Later, we will go to Raj Path and see President’s House, India Gate and gardens around it. India Gate is a war memorial constructed in memory of Indian soldiers who died during World War 1 and Anglo Afghan wars. After a short walk on Raj Path, it’ll be time to head back to the hotel for a night of rest. 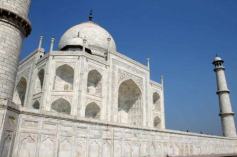 We will wake up early and board the vehicles for a 3 hours drive to Agra. After leaving our luggage at the hotel and a bit of rest, we will  reach Taj Mahal, one of the 7 wonders of the world and arguably the most beautiful too. Most people claim that it looks much better in real life than in photos. We will have enough time there to soak in all the sights and thousands of small but mind blowing details that most people miss without someone to tell them. We will take a relaxing walk in the gardens and enjoy the play of water in fountains which increase it’s beauty many times over. One major attraction is to sit on the marble bench and get photos clicked in the same place where countless celebrities like Diana have posed for pictures. After Taj Mahal, it’s time to visit Agra Fort made of red sandstone for an interesting history lesson. As we walk through various parts of the fort, we will notice the breathtaking views of Taj Mahal as well as the Agra town which will come up. After this, we’ll take a walk through the centuries old  and famous Agra market and take a look at the wide variety of colourful art and various other things on display.

After an early wake up, we will drive towards Jaipur and checkin the hotel for a couple of hours of rest. After freshening up, it’s time to explore the Pink City of India by way of a delightful food walk through it’s old markets and lanes. We’ll  walk through the lively streets and colourful markets enjoying the sights of this friendly city and sample all the delicious Rajasthani food it has to offer. During the food walk we’ll taste delicious kachouris, chai prepared over charcoal fire, some justly famous Rajasthani sweets, around half  a dozen different snacks and a big traditional Rajasthani dinner at the end. During the food walk of Jaipur, we’ll also cover sights such as Galta jee Temple (with it’s resident population of monkeys and langoors),  Nahargarh Fort and a few more. Local markets of Jaipur with their mind boggling varieties of colours, fragrances and people selling and buying almost everything under the sun like clothes, jewelery, bangles, shoes, utensils, spices will also be covered.  These traditional markets of Jaipur are a big attraction by themselves. The visitors will be introduced to some of the ingredients used in traditional Rajasthani cooking.

After an early breakfast, it’s time to have some fun with friendly and intelligent elephants of Elefantastic. We’ll have the chance to ride them, play, feed and do a tons of fun things with the gentle giants in Elefantastic. The trainers take very good care of the animals and they are treated 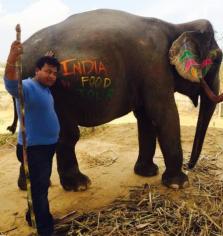 as loving family members instead of an owned animal. This is a much better way of interacting with these majestic beings, instead of just riding them which more often than not isn’t operated taking welfare of the animals in to account. You will have the chance to ride the elephants here, but in a humane, kindly and more involved way.  After a big platter full of traditional Rajasthani delicacies for lunch,  it’s time for a visit to the famous Hawa Mahal (Palace of wind). It’s 5 stories tall and built of red and pink sandstone. Front of Hawa Mahal consists of 953 small windows (jharokhas) which are decorated with intricate lattice work. We’ll then visit Jantar Mantar, an incredible astronomical observatory built in early 18th century by Maharaja Jai Singh. After observatory, we visit Jaipur City Palace which is still partly a royal residence in addition to housing a museum. Then it’s time to visit the famous Jal Mahal, a palace constructed on an island in Man Sagar Lake. The dinner will be another star attraction of this day as we’ll enjoy a traditional Rajasthani dinner with an old royal family of the city.

Another early morning wake up call and we drive towards Osian, our desert camp near Jodhpur . Just outside Jaipur, we’ll stop at Sambhar lake, India’s largest inland salt water lake. It’s area varies between 190 to 230 sq km and is the source of nearly 9% of India’s salt production. A large number of migratory birds call make this lake their winter home every year. We will visit some salt making workshops and observe their working from up close. After this, we will sart driving and reach Osian camp site by late afternoon. After some rest, we will take a walk in the desert and prepare to enjoy the sunset and activities planned for the night. The dinner, a traditional Rajasthani village meal from the region will be served around a campfire to be enjoyed under open night skies away from the noise and lights of city.  To make the night more lively and memorable, dancers and artisans from nearby villages will put up an entertaining performance. The night will be spent in the campsite in desert.

Day 7 will begin with an early morning camel safari of Thar desert. We’ll enjoy the camel rides, views of ever shifting sand dunes, perhaps spot some elusive wildlife as well as visit nearby tribal villages where we can observe their way of life from up close. We can dress up like them, eat in their kitchens, spend som 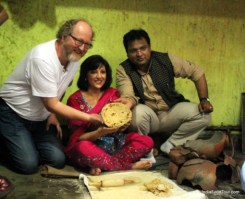 e time with domesticated animals and so on. It’s a great opportunity to learn about the way of life of simple Indian villagers, still mostly untouched by modern world around them.  A jeep safari can also be arranged if desired. We’ll then drive to Jodhpur city and visit the impressive Mehrangarh fort which is situated 122 m above the city.  The impressive fort includes attractions such as Sheesha Mahal, Moti Mahal, Fool Mahal and Takh Vilas, each one of which is a major attraction by itself. Evening will be dedicated to an interactive cooking demo in which you’ll learn the secrets of some traditional Indian including Rajasthani dishes and sweets. We’ll learn to cook around 12-14 different dishes from different Indian cuisines and learn the basics of using spices and other ingredients to make awesome meals in easiest possible way. The details that the chef Rajeev would have shared with you during the food tours and other related activities will prove useful here. Dinner will include the dishes cooked during the demo.

This will be the last day of the culinary tour as we’ll get in to our vehicles and drive back towards Delhi. If any of the guests need transport to airport or railway station for their journey elsewhere, it will be arranged according to their requirements.